I’m happy to show you some of the images I caught during the San Diego Shooting Group’s latest outing at Ellen Browning Scripps Park on the coast in gorgeous La Jolla!

We met up on Saturday to work on our photography skills. I had arranged for three models to join us, one of whom is 8 months pregnant! All three of the lovely ladies did a fantastic job, and I’m already loving the images I’ve seen from the group members on Facebook!

Since I organize the shoots for the group, I don’t often do much shooting while we’re together. Usually, I’m busy helping the models or other photographers (or both) while the photographers are snapping away. This time, I made a point to capture some of the moments while we were out on the beach! So here we are in action!

I was really happy to have Laura return this time! She modeled for us at one of our sessions last year, but returned with camera in hand this time! Here she is, on the right, in action as a photographer:

We are proud to be an equal-opportunity photography group! Here you see a Canon, a Sony, and a Nikon at work in harmony! ;)

Hey look! That’s my shadow in this shot! (a.k.a. breaking photography rule #876)

A great big thank you goes out to the 3 beautiful models who let us capture them on Saturday afternoon and also to the 8 photographers who made it out to this session!

If you’re a San Diego-based photographer looking for a group to get together and play with, please join us on Facebook! We meet up every other month, so our next group outing will be in April. :)

If you haven’t heard, I have taken over the reigns as the organizer for the Facebook-based San Diego Shooting Group. We’re a group of photographers that get together every other month to learn a little about photography, photograph a model or two, and have a lot of fun! I somehow convinced Shari of Shari Barnes Photography to join me as co-organizer of the group, and I’m so glad she’s on board!

For our last get-together, we met up at Powerhouse Park in Del Mar. I spoke about using one speedlight to enhance portrait work while Shari demonstrated the use of one studio strobe. We split up for most of the shoot, then came together at the end. Since I was helping others take photographs, I typically don’t really use my camera at all. However, this evening, I took advantage of the modeling light on Shari’s B-800 while some of the group members were photographing Lena. These were taken after the sun went down, and it was DARK out there! I mean really dark! I couldn’t even see my own hands! (Ok, that might be a bit of an exaggeration! But just a little bit!) To combat the darkness, I bumped up my ISO and captured the following.

Ok, time out! Skip ahead if you don’t want to nerd out about high ISO settings! All three of these shots were taken using my 50mm f/1.8 lens. The first two were taken at f/1.8 and 1/60sec. That last one was taken at 1/250sec and f/2.0! How, you ask? Well, for the first two, I was shooting at ISO 1600. For the last one, I bumped it up even higher. Anyone want to guess what ISO I had my camera set to? I’ll give you a couple of days to think about it, then reveal the answer here!

The San Diego Shooting Group is having its next event on Sunday, October 16 at a winery in Temecula! If you are interested in joining us, please find us on Facebook here! And, if you’d like a ticket to our next event, they will be going on sale this Thursday (10/6) promptly at 7:00 pm Pacific time at http://sdsg07.eventbrite.com/. I hope to see you there!

p.s. Don’t forget to leave your ISO guess in the comments below! :)

Robby’s math wins this round! He’s correct: I shot the third shot at ISO 6400. This was my first opportunity to see how far I could bump the ISO, and I was interested to see how it would turn out. :) Great job, Robby!

First of all, I want to welcome you to my new blogsite! I am so excited about the new direction we’re taking here, and I hope you are too! There are a few things that are still under construction, so check back for updates! And big thanks to Krista Ann Jones and the Conflux Group for helping me create this baby!

Here are some shots from what I’ve been up to recently. Last month, one of my husband’s cousins, Lauren, came out to spend her spring break with her aunt and uncle (my in-laws) down in Coronado. We hopped on the Amtrak and took a trip up to Los Angeles one lovely Sunday. We first checked out the Disney Concert Hall, home of the Los Angeles Philharmonic and designed by architect Frank Gehry. I love walking around the exterior of the concert hall, and we actually got in on a tour through the hall this time! It was fun!

For some reason, I always take the shot on the right when I’m at there. It comes out differently each time, and it’s become a fun little tradition! Below is Lauren in action inside the concert hall.

We spent the afternoon up in Hollywood, and took a tour of the homes in the area. I had never been up there before, but now I know why all the stars have their homes there. The area was absolutely gorgeous! Here’s the LA skyline from a vista in the Hollywood Hills. (I think that’s where we were!)

Last week, the San Diego Shooting Group got together for our fourth shoot! This time, we went “back to basics” and covered Photo 101 and Portrait 101 topics. We met up in Balboa Park, where Shari Barnes started it off by talking about general photography tips, then I discussed posing before we let everyone take turns with the two gorgeous models. I didn’t shoot any images of the girls because I wanted to allow the participants to have plenty of time to get some great shots, so here are some of the group in action!

Please check us out on Facebook (here) if you are interested in attending any of our future events! You can see some photos from our last event here.

Thanks for stopping by! I hope everyone is having a great weekend!

Posted February 07, 2011 In Engagements, San Diego Shooting Group
On Friday, the San Diego Shooting Group had our first shoot of the year! We’re a small group that will be getting together every so often to have fun while practicing our craft. If you are a photographer and would like to join our next shoot, please head over to our Facebook page to join the group!
This time, we had a great turn out! A fabulous engaged couple, Cori and Lamont, met up with us at the Burger Lounge in La Jolla, where we caught them enjoying a delicious milkshake. We then walked around several surrounding blocks and took turns posing and photographing the two of them, before heading back to Burger Lounge for a well-deserved dinner!
Here are a few shots of the group with Cori and Lamont. 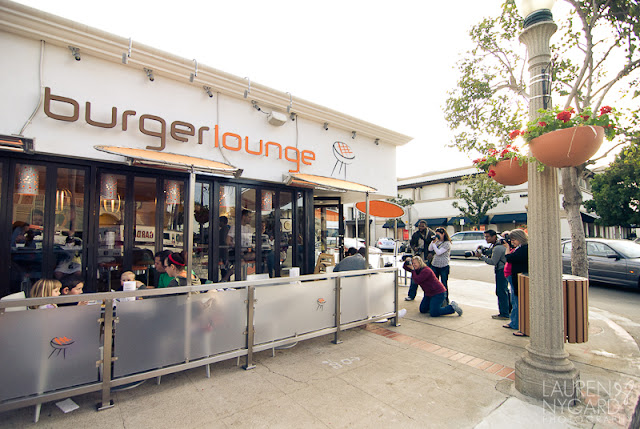 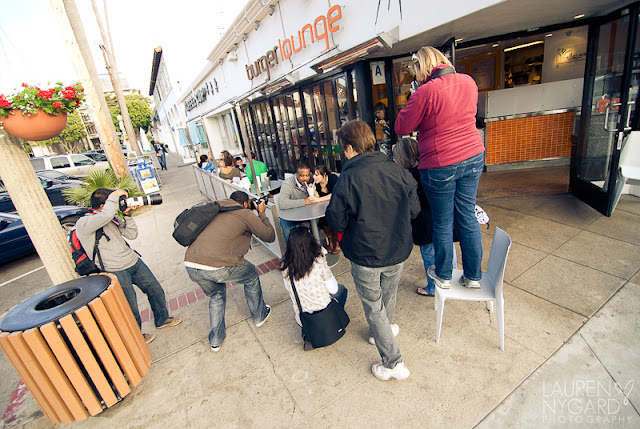 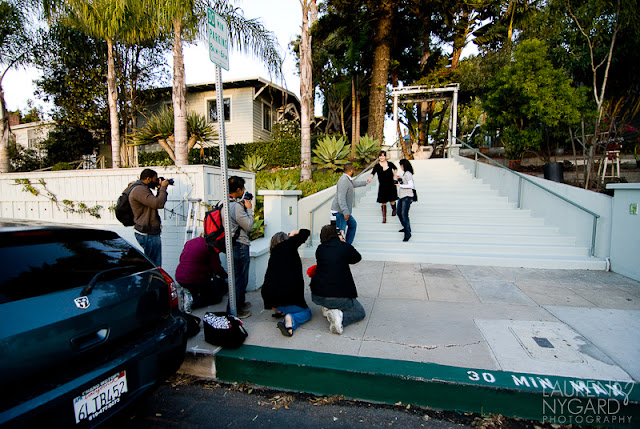 The following are a handful of the images I captured of the lovebirds! These two met twelve years ago while attending UCLA and remained friends for years before they started dating! Both studied Sociology at UCLA but later decided to follow different career paths: Lamont is now a writer while Cori does interior and graphic design. She’s actually the force behind the awesome design and inspiration blog, Pretty Haute Mess! Lamont and Cori joke that creative couples have more fun, and I definitely agree with them! 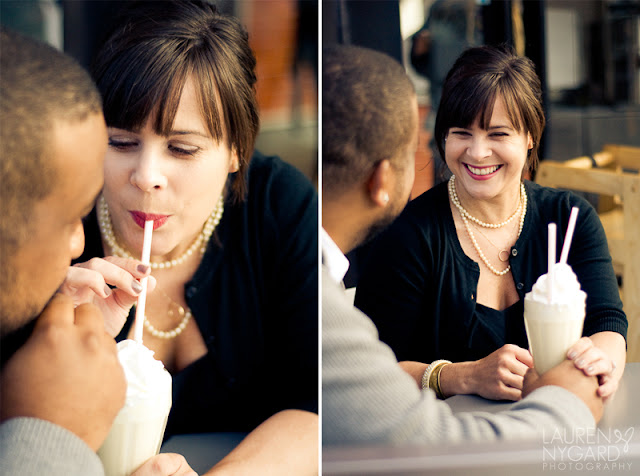 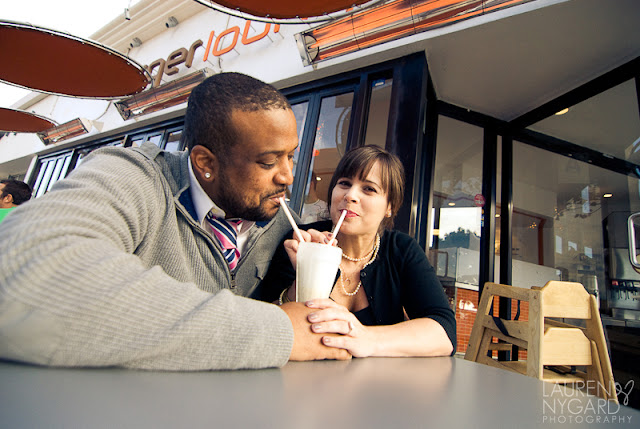 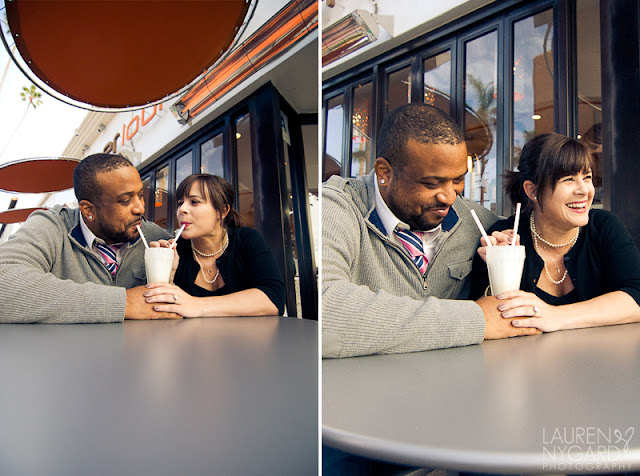 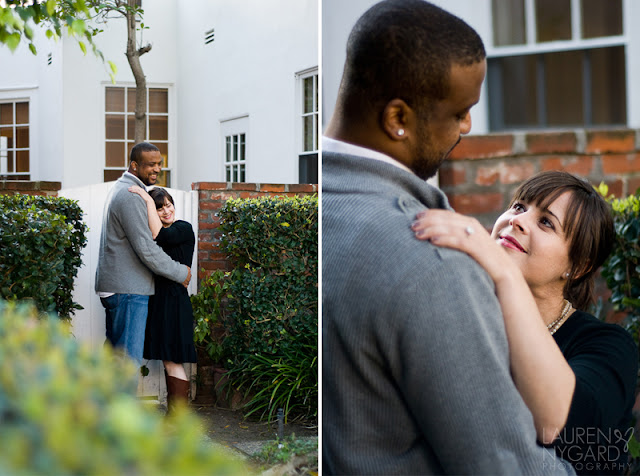 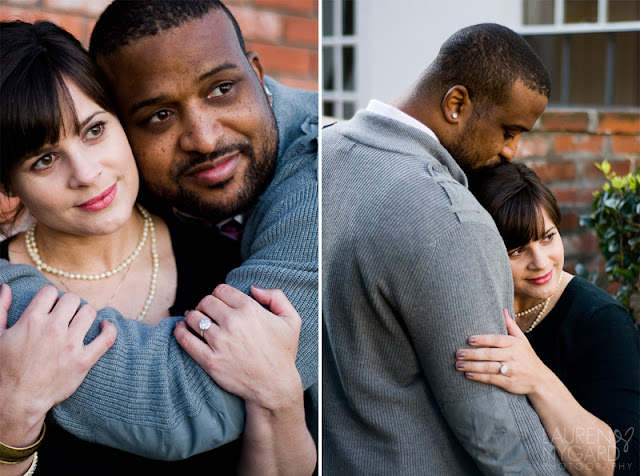 Isn’t Cori gorgeous? And how about that ring?! It is a vintage ring that belonged to her grandmother, Pearl, with whom Cori was very close. I don’t think it gets any sweeter than that… ;) 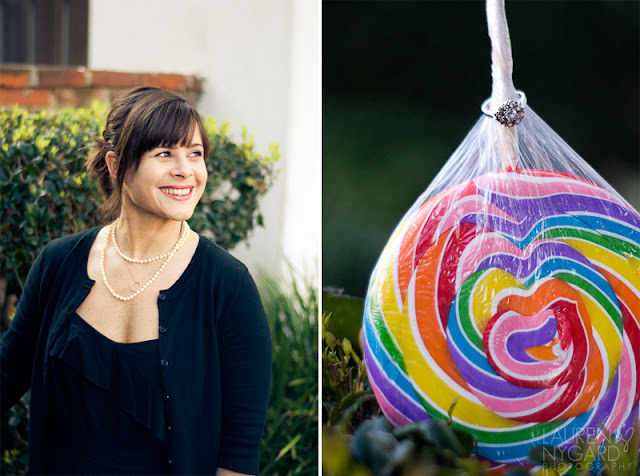 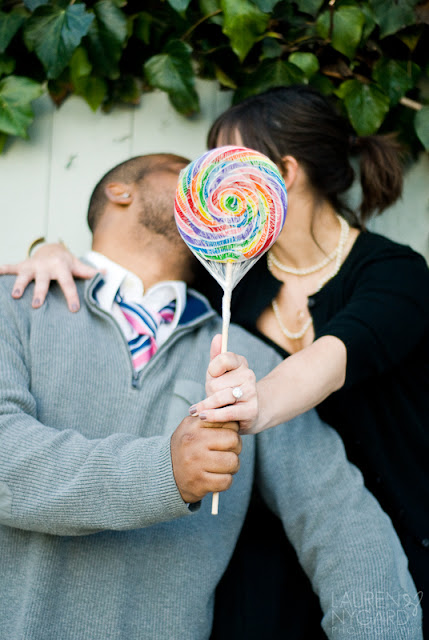 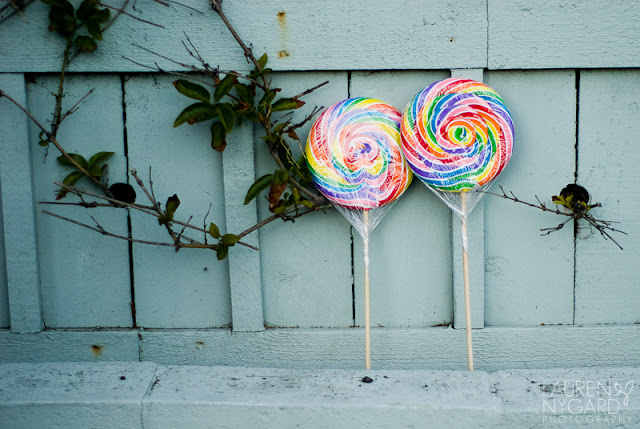 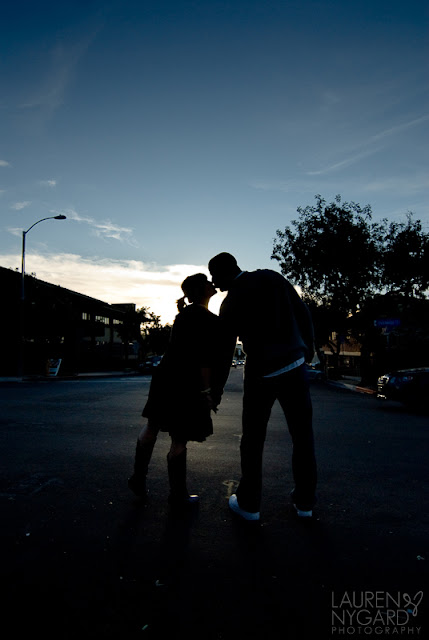 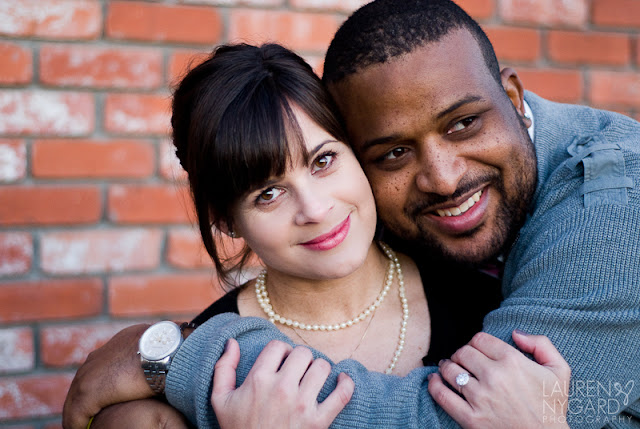 For the next few shots, Stephen Knuth set up one of Shari Barnes‘ speedlights to create dramatic lighting. She was kind enough to let all of us use the set up to grab some shots! The following image shows the great thing about knowing how to set up off-camera lighting. I used the available sunlight to create the image on the left, and the image on the right was taken using the speedlight that Stephen had set up. As you can see, Cori and Lamont didn’t change their pose at all–in fact, they didn’t move a bit! The only differences are (1) the introduction of one speedlight off camera to the left and (2) my location. What’s so great about this, you ask? I was able to come away with two very different images with zero changes from the couple. Cool, right?!?! 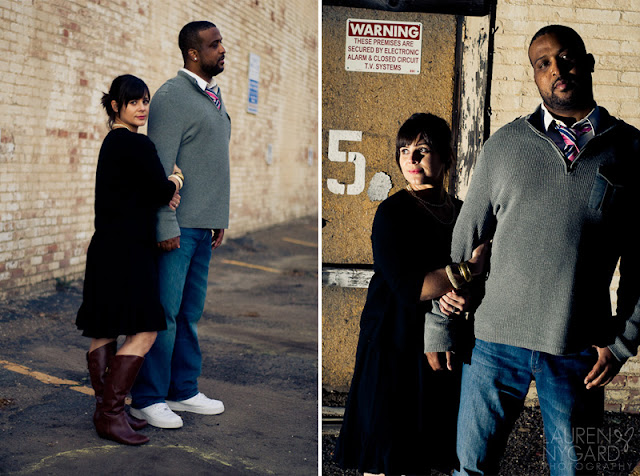 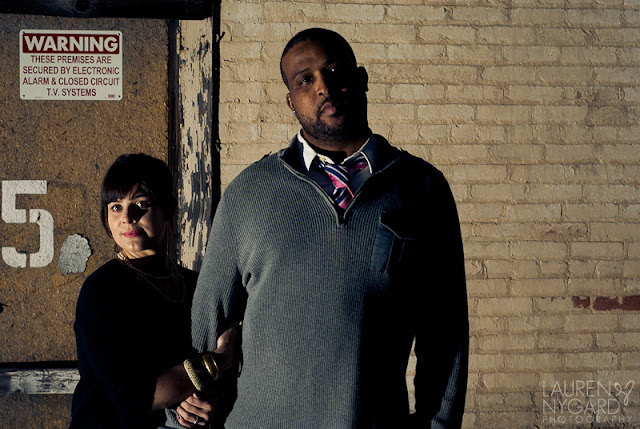 The following is my new favorite shot to set up! It’s one speedlight (I use a SB-600) triggered wirelessly from the camera. In this case, I was using the Nikon CLS system because other photographers were able to fire the flash as well. This set up requires a light stand, preferably one that’s voice-activated. Thankfully for us, Stephanie Zyga and Stephen were kind enough to be our stands. :) 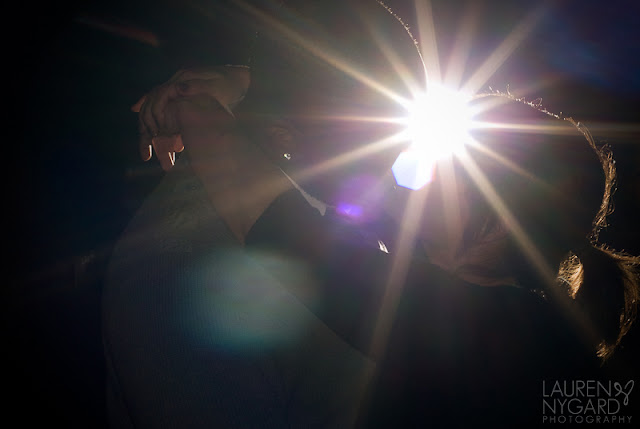 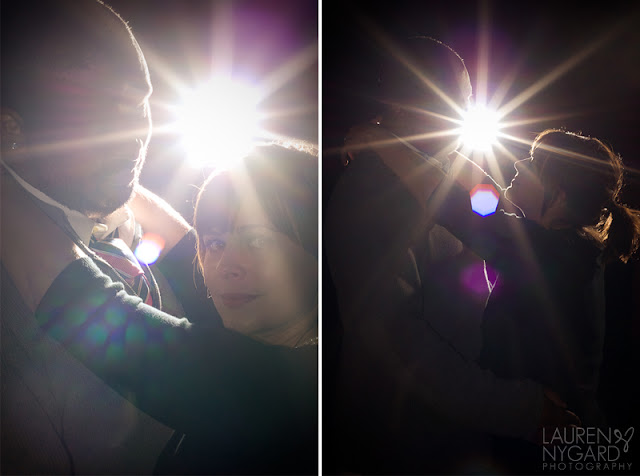 A big THANK YOU goes out to Cori and Lamont for coming down and letting us shoot you! By the way, did I mention what a trooper Lamont was?? He had just had surgery on the Monday before the shoot, so he was on crutches the day! He would move to where we wanted to pose the two of them, then one of us would grab his crutches, we’d shoot, and then give them back. :) I can’t thank them enough for spending their Friday afternoon and evening with the group!
0